A Seafaring Sketch of a Ramsgate fishing boat. 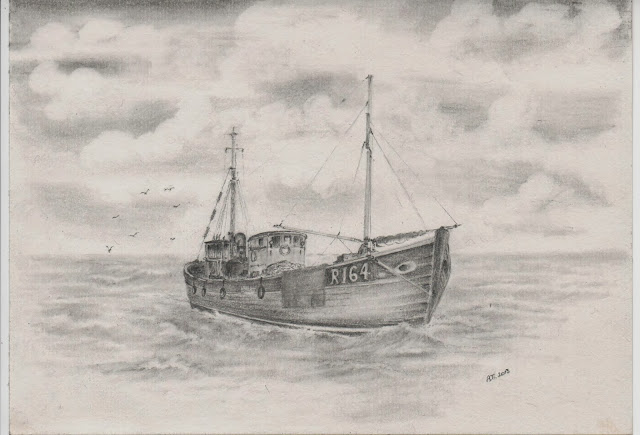 Relations of her ownership and the men who crewed her still, no doubt, reside in Ramsgate; No 164 motor fishing vessel, I remember the number quite clearly coming and going, because it was the same number as my friends house, and I have, since drawing this boat, discovered its name to be the ‘Jack and Eric’
There are no doubt people that can find fault with the sketch, but it was drawn one afternoon from memory to give credence to a story I was telling, so please forgive the omissions and put it down to artistic licence and ignorance of the subject matter.


My Aunt ‘Min’ and Uncle ‘Tom’ were a small part of the fishing fraternity, but because of the smell of the fish, that my dear mum couldn’t abide, I had to be very careful when they tied up with a catch. This didn’t deter my enthusiasm, boarding their boat many times in the harbour when they returned from the fishing grounds with a catch.
I remember one such time slipping and falling down the wooden steps only to be caught by Aunt Min who was gutting some of the catch for herself. She was a big round lady with arms that completely engulfed me with an ample bosom to match; of coarse she wreaked of the sea and the fish and smothered me in it. Fearing the worst when I reached home that day from Mum’s wrath, I tried I remember, creeping in the back door without being seen. No such luck though, that particular day she just looked at me with those big blue eyes of hers, the faintest of a knowing smile on her lovely face; she knew, she always knew what I’d been up to, and bade me strip right there in the scullery before coming any further into the house. The funny thing was we were brought up on a steady diet of fish, mum didn’t it seemed, mind cooking it, but the smell on our clothes evidently turned her stomach she told me in later years.

Hope you like the sketch,
Thanks for stopping by.