More from the workshop 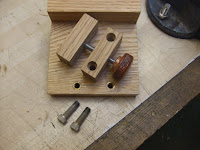 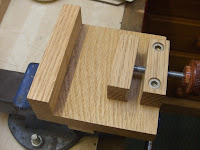 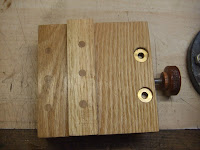 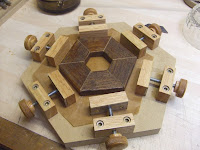 Thank you to all who have taken an interest in my chair legs, especially to John who wants to know how I clamp the segments if I don’t use an elastic band or tourniquet.
Another gadget I made, I call it my six-segment clamp, (took me a long time to think that one up), which I made quite a while ago now, but it works a treat.  See picture above.

The basic breakdown is shown in the pictures above of the little single clamp I use in the vice. I will see if I can find the drawing I made at the time and post it, quite simple really and neither of them didn’t cost me a penny, all made out of bits from the scrap box.


Reminds me of something I read a couple of weeks ago:

My father often used to say:
"My boy don't throw a thing away:
You'll find a use for it some day."


So in a box he stored up things,
Bent nails, old washers, pipes and rings,
And bolts and nuts and rusty springs.


Despite each blemish and each flaw,
Some use for everything he saw;
With things material, this was law.
And often when he'd work to do,
He searched the junk box through and through
And found old stuff as good as new.

I think it must be in the genes, because that explains my dad, he never threw anything away.

Anyway, glued the segments that I cut yesterday and attached it onto the faceplate with double sided tape. (Not wise to use hot glue with segments, or an expanding chuck, both tend to snap the segments) cleaned them up (both sides) then rounded the corners off ‘Hey Presto’ the beginnings of a bowl. 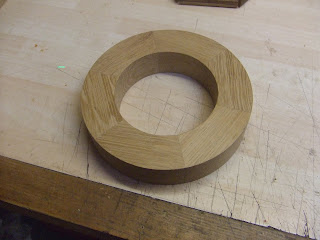 Next: Bottom and lid, but that’s for another day.


I have been called in to have an early lunch from the little lady indoors, because its Monday, craft afternoon over the Pavilion. I am going to take the drawing I started last week and see if I can get a bit more completed between all the gossip that I have to catch up with. I’ll let you know how it all went tomorrow, perhaps with a picture of my efforts.